As of July 2022, the number of smartphone users in the world are 6.6 Billion, which translates to 83.72% of the world’s population owning a smartphone. In the year 2021, total download count of different apps totaled to 88.3 Billion. Users are moving to mobile devices and there is a significant portion of business waiting to be tapped.

At Sunhim ecommerce, we cover all aspects of mobile app development, from requirements gathering all the way to app approvals and launch. We curate aesthetically appealing, easy to use, functional and cost effective mobile apps. 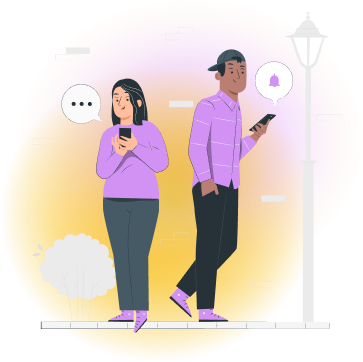 The 3 key questions to initiate the requirements analysis phase is asking the three questions:
Why? Why do we need the mobile app and what will it achieve
Who? who will be using the App and what solution do the user expect from the solution.
How? How will you meet user expectations and achieve desired results. What functionality are the users expecting

Wireframing is the process of building low-fidelity mockups that outline the structure and layouts of the pages, while conveying the information, direction and description of the user interface.
At Sunhim, we have a dedicated design team, to help with all your design needs, right from visioning & conceptualization, all the way to sharing aesthetically appealing protype design and ensuring approvals

Mockups help showcase app design from a medium to high-fidelity point of view. Though mockups are visually close to final version, they are not interactive or navigable.
Whereas Prototypes, apart from being close to final version, also help focus on functionality and user interaction, of the application. A well executed prototyping has shown to save overall cost, due to minimal rework, and considerably elevate customer experience.

We call this the build phase, where actual development is accomplished. At Sunhim, we typically work on Agile methodology, where work is broken down into 2 week sprints.
What is more important, with Agile methodology, the client gets to review work demo in every sprint, to monitor progress and suggest changes

Planning for QA begins right from requirement analysis phase and culminates after the launch. This includes the QA plan, design and execution of the actual test. These are often followed by re-run of the test and regression testing. Often times customers and users teams are often embedded in the testing phase, which ensure higher quality deliverables.

Each platform, weather iOS or Android, have their own app approval process and guidelines. The approval process has to be planned ahead and requires clear understanding of the platform needs. One thing to keep in mind is that, typically approval process takes time and you need to account ahead for it. Comprehensive testing is a must, particularly on security guidelines, to avoid rejections.

What are the types of mobile apps

Ionic and React Native are among the most common frameworks to develop Mobile apps, hence have a strong following and support for the frameworks.

Ionic has a greater emphasis on front end user experience. Since it allows developers to build once and run everywhere, it is relatively easy to learn. Its can also be easily integrated with other libraries and frameworks such as Angular, React etc. However as compared to React Native app, performance and security could be sometimes be found wanting. Often needing customization to address the gaps.

React  native: Often used to build cross-platform mobile application, for iOS, Android and Windows. React Native uses native components, as building blocks instead of Web components. It uses the features and capabilities of platform far better as compared to Ionic. As a result it performance is often found to be better. That being said, compared to Ionic, the learning curve for React Native is rather steep.

Why your business needs mobile app